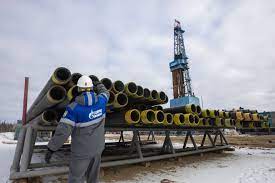 March 30, 2022: Russia plans to keep the contract currency for gas exports to Europe unchanged but will seek final payment in roubles as one of the options to switch the currency of gas trade, two Russian sources said on Wednesday.

“Only payment currency is changing, the contract currency is not,” one source said. For example, for deals clinched in euros the payment should be made at the official rouble/euro exchange rate set by the Russian central bank, that source said.

The Russian president told German Chancellor Olaf Scholz by phone on Wednesday that nothing would change for European partners and payments would still be made in euros and transferred to Gazprom bank, a German spokesperson said.

They added that Scholz is committed to a G7 agreement that energy supplies from Russia would be paid for only in euros or U.S. dollars.

The proposed scheme is one of the options and is not final, the sources said. According to a third Russian source, Gazprombank, Russia’s third-biggest bank, could serve as an intermediary for transactions between the gas buyers and Gazprom.

The payment should be done in the rouble equivalent on a pre-agreed settlement day, the sources said.

“There is no final decision yet, the work is ongoing,” a financial source involved in drafting the gas payments scheme told Reuters. The central bank, Gazprom and Gazprombank did not reply to a request for comment.

Moscow has yet to describe how it will go about the switch, which the Kremlin indicated on Wednesday could extend to Russia’s other exports, and the sources offered the first details that investors and customers have been keenly awaiting.

There is no clarity on whether gas buyers from so-called unfriendly countries – those that joined Western sanctions on Russia – will accept the demand to pay in roubles.

Gazprombank is one of the main channels for payments for Russian oil and gas. It was sanctioned by Britain along with some other Russian companies earlier this month.

On Wednesday, Germany triggered an emergency plan to manage gas supplies under which Europe’s largest economy could ration power if a standoff over Moscow’s demand for rouble payments disrupts or halts supplies.

Putin is due to listening to proposals on how to switch the payments to roubles, including from Gazprom and the central bank, on Thursday, and the scheme will be made public, Kremlin spokesman Dmitry Peskov said on Wednesday.

The customers will not be obliged to switch to roubles as soon as Thursday, Peskov said, as “payments and delivery is a time-consuming process.”

Gazprom, which accounts for 40% of European gas imports, does not disclose gas prices country by country but has planned to charge Western countries an average of $296 per 1,000 cubic metres this year, up from $280 in 2021.